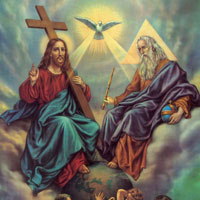 The Holy Trinity is the central mystery of the Christian faith. It’s only because of the Trinity, that Christians can call Jesus “Son of God,” and also “God the Son.”

It was to counteract these heresies that a special feast day celebrating the Trinity emerged. In one sense, the feast makes no sense. Every single Mass — and every single day — is devoted to praise and worship of the Holy Trinity.

But in another sense — a catechetical sense — the feast of the Trinity has great value.

There’s only one problem. Preaching about the Trinity is a dangerous thing! The mystery is so great, it’s almost impossible to expound upon without falling into heresy!

“St Patrick” demonstrates as much in this amusing video:

Graham Greene makes a similar point in his very funny Monsignor Quixote. (To set the scene, Fr Quixote has embarked on an enforced holiday with the former Mayor, who was in the seminary for a time, but left and became a Communist. They’ve stopped for dinner — and a bit too much wine — on the side of the road.)

“Can you explain the Trinity to me? It was more than they could do in Salamanca.”

“You see these bottles?”

“Two bottles equal in size. The wine they contained was of the same substance and it was born at the same time. There you have God the Father and God the Son and there, in the half bottle, God the Holy Ghost. Same substance. Same birth. They’re inseparable. Whoever partakes of one partakes of all three.”

“I was never, even in Salamanca, able to see the point of the Holy Ghost. He has always seemed to me a bit redundant.”

“We were not satisfied with two bottles, were we? That half bottle gave us the extra spark of life we both needed. We wouldn’t have been so happy without it. Perhaps we wouldn’t have had the courage to continue our journey. Even our friendship might have ceased without the Holy Spirit.”

“You are very ingenious, friend. I begin at least to understand what you mean by the Trinity. Not to believe in it, mind you. That will never do.”

Father Quixote sat in silence looking at the bottles. When the Mayor struck a match to light a cigarette he saw the bowed head of his companion. It was as though he had been deserted by the Spirit he had praised. “What is the matter, Father?” he asked.

“May God forgive me,” Father Quixote said, “for I have sinned.”

“It was only a joke, Father. Surely your God can understand a joke.”

“I have been guilty of heresy,” Father Quixote replied. “I think — perhaps — I am unworthy to be a priest.”

“What have you done?”

“I have given wrong instruction. The Holy Ghost is equal in all respect to the Father and the Son, and I have represented Him by this half bottle.”

“Is that a serious error, Father?”

“It is anathema. It was condemned expressly at I forget which Council. A very early Council. Perhaps it was Nicaea.”

“Don’t worry, Father. The matter is easily put right. We will throw away and forget this half bottle and I will bring a whole bottle from the car.”

“I have drunk more than I should. If I hadn’t drunk so much I would never, never have made that mistake. There is no sin worse than the sin against the Holy Ghost.”

“Forget it. We will put the matter right at once.”

So it was they drank another bottle. Father Quixote felt comforted and he was touched too by the sympathy of his companion. The manchegan wine was light, but it seemed wiser to them both to stretch out on the grass and sleep the night away where they were, and when the sun rose Father Quixote was able to smile at the sadness he had felt. There was no sin in a little forgetfulness and an inadvertent error. The manchegan wine had been the guilty party — it was not, after all, quite so light a wine as they had believed.

As they set off he said, “I was a little foolish last night, Sancho.”

“I though you spoke very well.”

“I did make you understand, perhaps, a little about the Trinity?”

“Then will you please forget the half bottle? It was a mistake that I should never have made.”

“I will remember only the full three bottles, friend.”