Today is the 96th anniversary of the first apparition of Our Lady’s of Fátima.

Later today, in Fátima, Portugal, the archbishop of Rio de Janeiro will consecrate to our Lady the pilgrims he will host for World Youth Day. The college of Portuguese bishops will join him at the shrine to consecrate Francis’ pontificate to our Lady of Fátima, at the pope’s personal request.

Here’s a three minute rundown of the Fátima apparitions for those who don’t know or need reminding:

In view of the supernatural events which occurred at Fátima, and Pope Francis’ evident belief in and devotion to the apparitions, today might be a good day to raise the spectre of mystics and visionaries who claim that Francis is an anti-pope and agent of the anti-Christ.

(I decided I wouldn’t blog about this, since I don’t want to add to its notoriety. But I have heard of priests, in Australia, who felt compelled to denounce these false prophets from the pulpit, such is the misplaced enthusiasm in some parishes.)

The most famous of these visionaries is “Maria Divine Mercy,” an anonymous Irish woman who claims to receive locutions from our Lord and the saints. She shot to fame in the wake of Pope Benedict’s resignation because of a locution she published nearly twelve months earlier, which seemed to prophesy his unusual departure:

My poor Holy Vicar, Pope Benedict XVI, will be ousted from the Holy See in Rome.

Last year, my daughter, I told you of the plot, within the corridors of the Vatican.

A plan to destroy My Holy Vicar was devised in secret on the 17th March, 2011, and this will come to fruition, for it has been foretold.

At the present time, more than eighteen thousand people follow Maria Divine Mercy on Facebook, and who knows how many people have paid for her ebooks?

Jimmy Akin, one of the Catholic sphere’s super-bloggers, wrote about her at length shortly after the election of Pope Francis, and concluded that she’s not worth heeding. His case is compelling, as is the case presented by Prof Mark Miraville, a renowned Mariology expert.

Neither author, though, considers the seed of self-destruction contained in Maria Divine Mercy’s most recent messages. In mid-March, she published a locution which ultimately exposes the lie. Here’s the pertinent part:

There is to be a particular insult, which will be inflicted upon My Holy Name, in an effort to desecrate Me, during Holy Week. This wicked gesture, during Holy Week, will be seen by those who keep their eyes open and this will be one of the signs by which you will know that the imposter, who sits on the throne in My Church on earth, does not come from Me.

I’d like to think that followers of Maria Divine Mercy’s messages paid extra attention to Pope Francis during Holy Week — and were at least perplexed when he didn’t deliver any desecration worthy of the name. The only gesture which remotely comes close was the pope’s Holy Thursday ritual feet-washing, which incorporated women and Muslims.

It was a controversial gesture, to be sure, but a wicked one? A “particular insult,” which desecrates the Lord himself? If this is the best the Anti-Christ can do, then maybe John’s Apocalypse is a bit overhyped.

Personally, though, I’m inclined to stick with the scriptural account and expect much worse from the forces of evil. Speaking of scripture, the Bible provides us with a measure for assessing prophets:

I will give thee a test; If the prophet foretells something in the Lord’s name, and it does not come about, this was no message from the Lord; it was the prophet’s vain conceit that imagined it; let no word of his strike terror into thee. (Deut 18:22)

That leads me to conclude that Maria Divine Mercy is a false prophet. Let no word of hers strike you with terror. Is Pope Francis an imposter? No. There’s nothing to see here. Carry on. 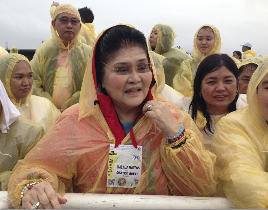