Skywhale belongs in one of Evelyn Waugh’s satirical novels. Instead, this $300,000 monstrosity is hovering over Canberra, ready to commemorate the city’s foundation. 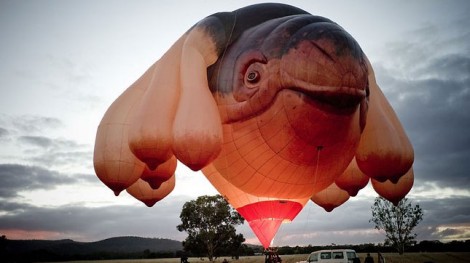 They call it “art,” and so do I. What a masterpiece of ironic mischief! Tim Blair puts it well:

The perfect symbol of our capital city – a bloated, gaseous, multi-breasted monster feeding those who dwell in its poisonous shadow while leeching off the rest of us.

I’m very appreciative of Skywhale, and not just because it makes me laugh. He — she? — it? — has given me cause to watch an outstanding episode of Doctor Who — a TV show which in my opinion is decidedly hit-and-miss (though to be fair I only watch the show about three times a year). If you’ve already seen ‘The Beast Below,’ you’ll know why a Facebook friend has connected the episode to Skywhale.

‘The Beast Below’ is great TV, and its artistic credentials aren’t limited to Skywhale. The episode explores terrible moral dilemmas in a spirit reminiscent of Fyodor Dostoevsky’s The Brothers Karamazov. Fifty minutes of fast-moving comedy drama doesn’t permit an exploration of great profundity, but it’s thoughtful and thought-provoking nonetheless, especially if you read some of the great Russian author first.

In the most famous chapter of Dostoevsky’s most famous book, two of the Karamazov brothers debate the problem of evil. Ivan is 24 years old, an intelligent rationalist who rails against God. Alyosha is 20 years old, a novice monk, and the book’s hero.

Here Ivan sets down the terms of the debate:

I meant to speak of the suffering of mankind generally, but we had better confine ourselves to the sufferings of the children. That reduces the scope of my argument to a tenth of what it would be. Still we’d better keep to the children, though it does weaken my case.

The second reason why I won’t speak of grown-up people is that, besides being disgusting and unworthy of love, they have a compensation — they’ve eaten the apple and know good and evil, and they have become ‘like gods.’ They go on eating it still. But the children haven’t eaten anything, and are so far innocent.

I thought of these words from Ivan as I watched Doctor Who. I think you will too.

A short while later, Ivan says something even more resonant. He has made his case against a just God who permits the innocent to suffer. Now he challenges his brother. If Alyosha was God, would he allow the innocent to suffer for the greater good? If it guaranteed perfect happiness for everyone else, would he permit the suffering of just one innocent child?

“Tell me yourself, I challenge your answer,” said Ivan earnestly. “Imagine that you are creating a fabric of human destiny with the object of making men happy in the end, giving them peace and rest at last, but that it was essential and inevitable to torture to death only one tiny creature — that baby beating its breast with its fist, for instance — and to found that edifice on its unavenged tears. Would you consent to be the architect on those conditions? Tell me, and tell the truth.”

I’d like to think I wouldn’t consent either. But how would I decide in the moment? What if I could save a great multitude — myself included, and everyone I love — by forsaking only one life? This is the confronting question raised in Doctor Who.

Who knew silly television could be so serious? It’s even better when the Doctor declares that after an act of ‘mercy killing,’ he’d better find himself another name because he doesn’t deserve to be called “the Doctor” anymore. Take that, harbingers of euthanasia!

So find the time to sit back, relax, and enjoy 50 minutes of ‘mindful entertainment.’

(If the video doesn’t appear, try the direct link.)