There are many reasons to be grateful for mothers.

Nations rise and fall, empires prosper or crumble and men and women are stirred to greatness or driven to failure often because of their mother’s influence. “The hand that rocks the cradle is the hand that rules the world.”

In the homily he preached at his mother’s funeral, Fr George Rutler evoked the debt civilisation owes to motherhood:

Thirty years have not dimmed my recollection of a night at the opera with my parents. We were close enough to see that the baby the soprano was holding was a doll, but when in a traumatic scene she dashed it to the ground, my mother let out a cry that could be heard by the prima donna. I was young enough then to be embarrassed. I am old enough now to know that such a cry has been the salvation of whole civilizations.

Doug McManaman’s mother carried those wounds, though she herself was an excellent mother. At the end of her life, as dementia slowly took hold over her, he was able to reciprocate his mother’s love and care by helping her heal those wounds:

I asked her — for the sake of something to say: “If you were to think of one person in your life that you need to forgive, who would it be?”

She thought for a few seconds and said, “I don’t know.”

So I thought for a moment and recalled a picture of my mother when she was four years old, dressed in a black tunic, ready to be sent off to the convent in Riviere-du-Loup.  “Maybe your mother?”

After a minute or two, I got an idea: “Mom, let’s try something. Close your eyes.” She closed her eyes.

“Imagine your mother.” She followed carefully.

“Now say out loud, “Mother, I forgive you.” I watched her face for about half a minute, not sure whether she was awake or asleep.

Finally, she moved herself to a more comfortable position on the wheelchair and said: “No, I don’t think so.”

Read the rest there.

I don’t know why sons are like that. But we are. It’s a good start to know it, so then we can fix it! Scott Hahn learned that lesson very early:

For all my newfound piety, I was still fifteen years old, and all too conscious of “cool.” Just months before, I’d left behind several years of juvenile delinquency and accepted Jesus as my personal Lord and Savior. My parents, who were not particularly devout Presbyterians, noticed the change in me and heartily approved. If it took religion to keep me out of juvenile detention, so be it.

Zeal for my new faith consumed me, most of the time. But, one spring day, I was aware of something else consuming me. I had a stomach bug, with all the unpleasant symptoms. I explained my predicament to my homeroom teacher, who sent me to the school nurse. The nurse, after taking my temperature, told me to lie down while she phoned my mother.

From the conversation I overheard, I could tell I’d be going home. I felt instant relief and dozed off.

I awoke to a sound that cut me like a razor. It was my mother’s voice, and it was saturated with maternal pity.

“Ah,” she said when she saw me lying there.

Then suddenly it dawned on me. My mother is taking me home. What if my friends see her leading me out of the school? What if she tries to put her arm around me? I’ll be a laughingstock. . . .

You can read the rest over there.

God bless all mothers, everywhere. God forgive us for not thanking them enough. And God give us the grace to be as generous as our mums are! 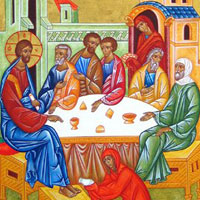