A mixed choir from Ireland, the Lassus Scholars, have lead the music at all the conference liturgies. They are outstanding. A sublime mix of plainchant, mediaeval polyphony, and traditional Christmas carols. Sacred music has an extraordinary ability to raise the mind and heart to God.

The beauty of the churches we have prayed in are also a great aid to prayer. But it’s not just the beauty – it’s also the historicity of these places. Cardinal Pell preached yesterday, and he began by relating some of the history of Santa Maria in Trastevere.

It is, apparently, the oldest church in Rome, insofar as it was the first “official house of worship” wherein Christians could publicly pray. In the first few centuries of the Church, Christians in Rome worshipped discreetly, and celebrated Sunday Mass in “house churches” – private homes of the faithful.

Parts of the church are so old that they in fact predate Christianity. The pillars in the nave, for example, are salvaged from several pagan temples. It is an old building, and a dark one. There is no natural light. But although it is dark, it is not gloomy – the mosaics in the sanctuary are luminous. 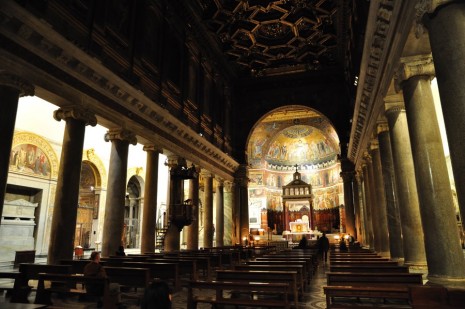 Santa Maria in Trastevere: dark, but not gloomy

Cardinal Pell evoked the theme of light which imbues Christmas and especially Epiphany, but his words played to the church we were in, too. He suggested that the darkness of paganism may ebb and flow in our world, but it will never overcome the light of Christ, and it’s our task to carry the torch and illuminate the shadows of our time.

These words came back to me at today’s Mass at St Paul’s Outside the Walls. This is a very different church. It less than 200 years old, and it is immensely light and airy. It’s also just plain immense. St Paul’s evokes solidity and permanence. 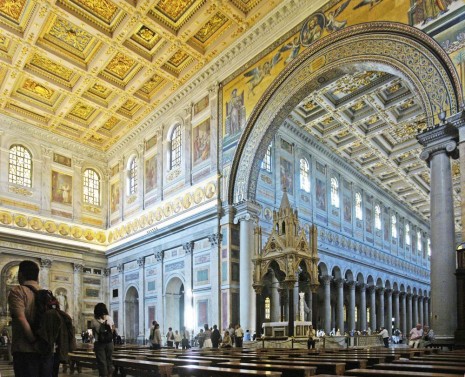 St Paul Outside the Walls: even more beautiful than this photo suggests.

During Mass today I prayed especially for the victims of yesterday’s Islamist attack in Paris. As I looked around, I pondered how illusory the permanence of this church is. I contemplated not just the physical basilica, but also the faith in Europe, and the freedoms of liberal democracy. All of these things are threatened by the barbarity and violence of Islamism. Islam is not pagan – strictly speaking, it’s a heresy – but it is, nonetheless, the intellectual and spiritual inspiration of a darkness which threatens to spread through Europe and beyond.

As beautiful and big and bright as St Paul’s Basilica is – evocative of Christ, the Alpha and the Omega – I found more consolation in Santa Maria in Trastevere. Especially in its comparative modesty, and in its warm pockets of light which scatter the shadows.

The confidence and brashness and self-assurance of St Paul’s doesn’t suit the present mood, I think. It is warmth and goodness and heroic courage which these times call for, which is evoked not only in the long history of Santa Maria in Trastevere, but also in its very stones: in its architecture and atmosphere.