Emergency workers were struggling to free Katie Lentz from her car wreck, and there was a good chance they were going to lose her. An hour into the rescue, when Lentz asked the rescue crew to pray with her, a Catholic priest suddenly appeared and anointed her.

The mystery priest consoled Lentz, and his assurances that the crew would get her out in time proved true a short time after. But the priest disappeared as suddenly as he appeared, and unusually, he doesn’t appear in a single photo of the accident scene.

Here’s a video with the pertinent details:

I like what Lentz’s friend, Travis Wiseman, had to say:

“Where did this guy come from? We’re looking for the priest and so far, no one has seen him. Whether it was a priest as an angel or an actual angel, he was an angel to all those and to Katie.”

Wiseman’s words were careful and precise. Not many people these days distinguish between actual angels and human beings whose intervention is angelic. I wonder if Wiseman is Catholic?

Meanwhile, some people are suggesting the mystery priest was actually a saintly apparation. The UK’s Daily Mail has nominated St Pio and St Toribo Romo.

The man who appeared at the crash site was said by those who saw him to have an olive complexion, facial hair, a foreign accent and carried an old wooden rosary — which he prayed with while the emergency workers battled to free Katie Lentz.

St Toribo Romo, meanwhile, is supposed to resemble a composite sketch of the mystery priest: 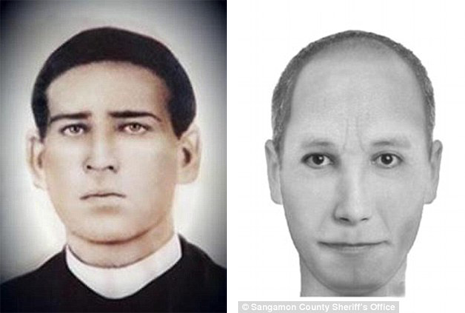 Padre Pio was famous for his bilocation, and St Toribo made resurrection appearances after his death, but based on the evidence at hand, I think these connections are a stretch.

The local diocese is low key:

Catholic leaders aren’t spending too much time on the case. While they there open to the idea that this was a potential miracle, as their faith compels them to remain open to the prospect, [spokesman Deacon Dan] Joyce isn’t going out of his way to find answers.

“We’re not going to be conducting any sort of investigation, certainly out of respect to our priests who might have been involved — in respect for their privacy if they don’t want to come forward,” he said.

To my mind, this has all the marks of the miraculous. By rights, Lentz should have been killed, and quite apart from that, a priest providentially happens upon the scene and ministers spiritual assistance which should not be underestimated. It belongs to that category of miracles which surround, for example, the brown scapular.

I certainly don’t think the miracle demands the priest be an angelic spirit, or a saintly apparition. That puts to bed, I think, the Friendly Atheist’s critique of the story. His post is worth reading. He makes a lot of good points, and he alerts us to the danger of allowing religion to be sensationalised and superstitionalised. That only confirms the new atheists’ caricature of faith.

Supernaturalising events is something quite different, and much more advisable. Thanks be to God for Katie Lentz’s survival, and for this mystery priest’s presence and ministry.