St Barnabas: the apostle
you’d share a beer with 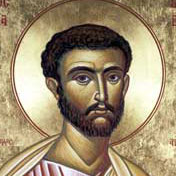 Today is the feast of St Barnabas, who sounds like an especially likeable fellow.

It is sometimes said that to live with a saint, one must be a saint. That’s testament to the fact that saints are typically strong-willed. I imagine it would be very hard to live with a Saint Paul, or a Saint Jerome, or a Padre Pio. But there are other saints who were by all accounts delightful company: St Thomas More, St Thérèse (after she’d grown up), St Josemaría.

I think St Barnabas belongs in the latter company. He first attracted attention among the early Christians for a remarkable act of generosity. He sold a field which belonged to him, and laid the money at the apostles’ feet. (Acts 4:37)

Later, it was Barnabas who welcome the newly-converted Paul to Jerusalem. The apostles were understandably wary of their erstwhile enemy. Saul was one of the Church’s most vicious persecutors. He was no mere bystander at the stoning of Stephen. The executioners had places their garments at Saul’s feet, indicating he had presided over Stephen’s judicial murder. (Acts 7:58) But now, having heard of Paul’s conversion, Barnabas intercedes, dispels the apostles’ suspicions, and facilitates Paul’s reception.

In today’s First Reading, St Luke describes him as “a good man, filled with the Holy Spirit and with faith.” (Acts 11:24) Through his efforts in Antioch, “a large number of people were won over to the Lord.” It sounds like Barnabas’ apostolate in Antioch was fruitful, but that didn’t stop him travelling to Tarsus and requesting Paul’s help. Barnabas was not only generous and good-natured, but also humble.

For several years, Barnabas and Paul worked as a remarkably successful duo, until a disagreement over Mark (Barnabas’ cousin) came between them:

Barnabas wanted to take John, also called Mark, with them, but Paul did not think it wise to take him, because he had deserted them in Pamphylia and had not continued with them in the work. Barnabas and Paul had such a sharp disagreement that they parted company. Barnabas took Mark and sailed for Cyprus, but Paul chose Silas and left, commended by the believers to the grace of the Lord. He went through Syria and Cilicia, strengthening the churches. (Acts 15:37-41)

I don’t pretend to be an expert, but it’s easy to imagine that Paul was unyielding and stood on principle, while Barnabas was compassionate and forgiving — perhaps to a fault. In the words of St Jerome (who was himself the stern type!):

Paul sterner, Barnabas kinder, each holds on to his point of view. The argument shows human weakness at work. (Dialogus adversus pelagianos 2, 17.)

The gifts of the two men differ, and clearly this difference itself is a gift . . . if they go different ways, in order to teach and convert people, there is nothing wrong about that . . . If only all our divisions were motivated by zeal for preaching! (Homily on Acts, 34.)

In any event, Paul and Barnabas were not estranged forever. Paul always wrote of Barnabas in glowing terms, and he himself later worked with Mark. According to tradition, Barnabas was stoned in 61 by his Cyprian compatriots. Mark was present and dutifully buried him.

I think Barnabas is a good model. It sounds like he was naturally likeable, he was inclined to give people the benefit of the doubt, and he was quick to forgive. His real name was Joseph, but he was nicknamed Barnabas: “Son of Encouragement.” His apostolate was fruitful, and yet he is eclipsed, really, by Paul and Mark, both of whom were indebted to him.

Quite frankly, St Barnabas reminds me of our Lady — at least as I imagine her. Compassionate. Loyal. Approachable. Eager to work in the background.

St Barnabas, pray for us.