The smell of smoke and an eery red hue have lingered since lunch time. Reports from the CFA aren’t great. The nearby fires in the Grampians doubled in size overnight, and it seems only rain can bring them under control now.

But it won’t rain before Monday, and in the meantime, a change from the north will raise temperatures and redirect the fires toward population centres. It’s going to be a long weekend, in the worst possible sense.

Many parishioners are already adversely impacted, and many more have dropped everything and joined in the effort to fight the fires, and care for the fire fighters. Keep them in your prayers!

The view in Hamilton

The view at Glenisla at 2pm this afternoon

The view at Mirranatwa, sent by one of our parishioners. His family evacuated on Sunday. He was hit by a falling tree while fighting the fires yesterday, so he’s now out of action due to concussion — much to the relief of his young children. 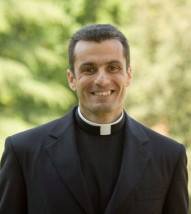