This morning I filmed two more episodes of Mass For You At Home. They won’t be screened until September. This time, some Hamilton parishioners – holidaying in Melbourne – accompanied me. Andrew and Taryn and Lauren joined the congregation. Bailey served.

But first, we had to stop by the dreaded makeup department. Back when I served for Fr Withoos, I had to wear makeup for all two minutes of my airtime. I thought Bailey would be my brother in solidarity. But no! He was spared that cruel fate, and instead the whole family watched in amusement while I was tortured. They even took photos!

Can any man really relate the horror of the feeling of foundation?

My brave smile masks the terrible suffering I endured.

I’m prepared to admit I’m engaging in some mild hyperbole. But I can say in all seriousness that I have new respect for women, who afflict themselves with makeup every day. I salute you!

We moved from makeup to the studio, where I was greeted by an old friend from the seminary, Fr Andrew McCarter, who is a newly ordained priest for the Archdiocese of Melbourne. I guess the masses he celebrated will be screened in August.

There are no embarrassing incidents to report this time. Which is not to say I didn’t make mistakes! It’s just that they weren’t noticeable. (Says I. Perhaps Channel Ten’s mailbag will prove otherwise!)

There was a Redemptorist priest on set last week and today. John someone. I forgot his name. But this evening I mentioned him to Bishop Paul Bird, who is a Redemptorist himself.

“Oh yes, John Hill,” the bishop replied. “He’s a scripture scholar, you know. He teaches at the Yarra Theological Union.”

Thankfully, I did not know. It’s always slightly unnerving preaching to a congregation which includes priests. I think it’s a peer thing. (Preaching in the seminary, to brother seminarians, was even worse!)

If I had known that a scripture scholar had been on set while I was delivering 4 minute ferverinos, I might have been reduced to a quivering wreck! The makeup, the floor director, the lights and the cameras are one thing. But scripture scholars!? My word!

The Hamilton crew. (Well, Mirranatwa actually, but let's not get picky.)

The kids enjoyed a tour of the Channel Ten studios afterwards. Not a bad way to cap off a trip to the city!

I am on retreat this week with my brother priests of the Ballarat diocese. Pray for us!

“I think I want to be an altar boy” 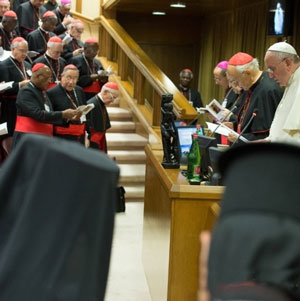