One evening earlier this week, a friend and I were walking up Drummond Street in Carlton. The neighbourhood is very familiar to me, not only from my seminary years, but also from my university years.

We passed a building which once housed Shannyn Bennet’s famous Vue de Monde restaurant — before he relocated to the CBD. “This is where I enjoyed the greatest meal of my life,” I declared. It was a ten-course degustation menu focused on truffles. Yum! (I’m not usually given to blogging about food, but I have blogged about truffles before — here and here.)

This is when my friend surprised me. And by that, I mean he floored me. He described a French dish which is so luxurious — so excessively extravagant — that I thought he was making it up. Turns out he wasn’t.

Ortolans are a small songbird, similar to finches. Let me explain how they are served according to the finest traditions of French cuisine. You’ll probably have to read this twice just to process it.

1. The birds are caught with ground nets, set during their migratory flight to Africa. Then they are transferred to dark cages.

2. The Ancient Romans would gouge the ortolans’ eyes out, so that the poor birds would think winter had arrived early, and gorge themselves on grain. Enlightened moderns do not blind the birds, but they do keep them in complete darkness for a month or more.

3. When the gorging birds have tripled their original size, they are drowned in Armagnac, and allowed to marinate there for some time. Seriously. I’m not making this up!

4. The marinated bird is roasted for seven minutes, or eight minutes at a pinch.

5. The bird is promptly plucked and served on a plate, still sizzling in its hot fats. 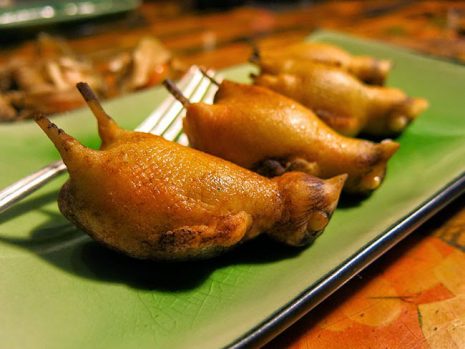 6. The diner handles the bird by its beak, and places the entire bird, feet first, into his or her mouth.

7. The bird is still very hot, and likely to burn the diner’s mouth. Its bones will often cut the diner’s gums and mouth, drawing blood. The pain and blood is supposed to enhance the flavours and culinary experience.

8. The ortolan is traditionally consumed with a napkin covering the diner’s head. There is a three-fold explanation for this strange practice: 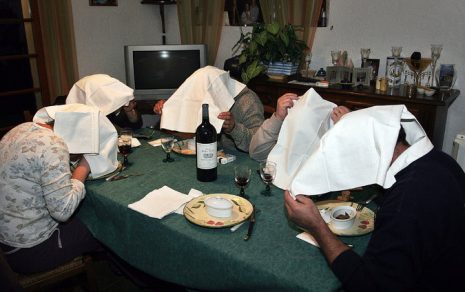 “With every bite, as the thin bones and layers of fat, meat, skin and organs compact in on themselves, there are sublime dribbles of varied and wondrous ancient flavours: figs, Armagnac, dark flesh slightly infused with the salty taste of my own blood as my mouth is pricked by the sharp bones.”

I must confess I am simultaneously attracted to, and repulsed by, this extraordinary indulgence. I am resolved never to dine on ortolan, but I readily admit that my puritanical streak informs that decision. The whole exercise of preparation, cooking and dining constitutes an exquisite example of gross gluttony.

As a child, my understanding of gluttony involved an obese king, gorging himself on food, then deliberately bringing that food up so that he could gorge himself again. But gluttony is actually much more expansive. Truth is, I am not as innocent of this sin as I once thought, and maybe you’re not either.

Pope St Gregory the Great famously defined the deadly sin of gluttony as eating food too soon, too delicately, too expensively, too greedily, or too much. St Thomas Aquinas didn’t disagree. I’ve always struggled to conceive of gluttony in such expansive terms. Until I learned about ortolon.

The following video clip really takes the cake. It depicts a probably fictional meal hosted by French President François Mitterrand — a known fan of ortolon — and enjoyed by the Irish Taoiseach Charles Haughey, who probably never ate ortolon in his life. But forget about its historicity. The clip is fascnating in its own right. It depicts the sensuality of gluttony, but also, in this instance, frames it as something deeply and disturbingly idolatrous.

I will never think of gluttony the same way again.