Three years ago today, at the conclusion of my ‘First Mass,’ I placed flowers before an image of Our Lady, and consecrated my priestly ministry to her Immaculate Heart.

But immediately before that, I presented my own mother with a special gift. The previous day, the bishop had anointed my hands with the Oil of Chrism. I used a specially bought cloth (an embroidered purificator, I recall) to remove the excess oil from my hands. It was this cloth, perfumed by the Chrism, which I presented to Mum after my First Mass.

This custom is the modern variation of an old and venerable tradition, wherein a newly ordained priest presented to his mother his manitergium. 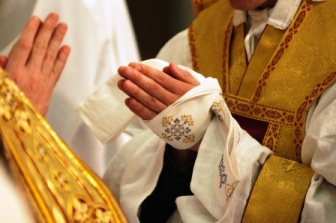 The manutergium (from the Latin manu+tergium = hand towel) is a long cloth that was used in the preconciliar rite of ordination. It was wrapped around the hands of the newly ordained priest after the bishop had anointed his hands with the sacred Chrism. The purpose was to prevent excess oil from dripping onto vestments or the floor during the remainder of the ordination rites.

According to tradition, the mother of a priest is to keep this precious cloth in a safe place. When she is buried, the cloth is placed in her hands. In the case of an open coffin, it serves as a reminder that one of her sons is a priest — a rare honour given to few.

The practice also evokes a pious legend, which imagines that when the mother of a priest finally meets our Lord face to face, and is asked that fateful question — “Did you love me?” — she can reply in the affirmative, presenting as part of her case, her Chrism-fragranced hands. This demonstrates that she loved our Lord so much, that she gave to him one of her sons, to serve him as a priest.

The literal details of that legend are of course superstitious, but I don’t think the gesture can be reduced to superstition. I think the presentation of the manutergium recognises and honours something profound. Not being a mother myself, I can’t very well describe it. (Perhaps I should ask my mum!)

In the meantime, we can consider this very moving footage from the ordination of three priests in Melbourne last June. If pictures tell a thousand words, then a motion picture must tell millions.

This video shows Fr Michael Kong, Fr Matthew Baldwin, and Fr Vinh Nguyen processing out at the conclusion of their ordination, and receiving the congratulations of their brother priests and seminarians. Then it cuts to Fr Michael blessing his mother, who is deeply, deeply, moved. That scene speaks volumes, I imagine, to what every woman of faith experiences, when her son becomes a priest.