I came across a cartoon on Facebook this week, which works on so many levels: 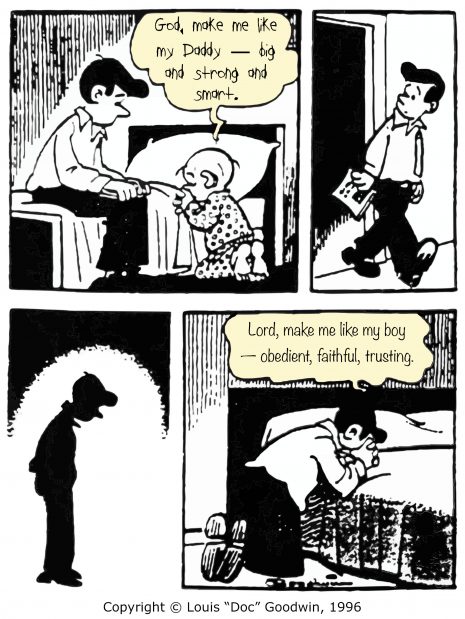 It speaks for itself. But it also speaks to the sort of Church Jesus founded. Consider one of the most momentous moments in the history of the Church:

Then Simon Peter spoke up, ‘You are the Christ,’ he said, ‘the Son of the living God.’

Jesus replied, ‘Simon son of Jonah, you are a happy man! Because it was not flesh and blood that revealed this to you but my Father in heaven. So I now say to you: You are Peter and on this rock I will build my Church.’ (Mt 16:15-18)

There’s some dispute over what our Lord intends here. Some of the Church Fathers — and this is an interpretation favoured by many Protestants — believe that the rock on which Jesus will build his Church is Peter’s profession of faith. That takes a lot of pressure off Christians who are unwilling to recognise papal authority. But it also has implications on ecclesiology. If the Church is founded on an expression of faith, it’s inherently intellectual. Ideas and beliefs drive the Church.

Another interpretation posits the object of Peter’s profession as the rock. That is: Jesus himself is the rock on which he intends to build his Church. This too has implications on ecclesiology. If the Church is founded on Jesus, it’s not so much intellectual as it is personal. In that case, people and relationships drive the Church.

The third interpretation, and perhaps the most common, is that Peter himself is the rock on which Jesus will build his Church. In this account, too, the Church is inherently personal: defined by people and relationships. This interpretation is the most compelling, I think, since it explains why Simon just got a name change. Jesus calls him “Cephas” or Peter or “Rocky,” because Simon himself personifies the rock.

Later — at the Last Supper — Jesus says to Peter:

I have prayed for you, Simon, that your faith may not fail, and once you have recovered, you in your turn must strengthen your brothers. (Lk 22:32)

Eventually, that’s what Peter does. He strengthens the other disciples. It’s also what Peter’s successors have tried to do for 2,000 years, right down to Pope Francis. You and I — as members of the Church — have a similar commission. We’re also called to “strengthen the brethren.” To encourage others. To support them; to motivate; to fortify and edify.

What does that look like? Well, the cartoon of Junior and his dad gives us a good example. So often it’s precisely in our weakness — when we make ourselves vulnerable — that we strengthen others. We tend to avoid vulnerability, because we’re afraid that it makes us look weak. But it’s different when we watch others. When they’re vulnerable, we admire them for their courage and strength! Here’s a few examples of what I mean:

Maybe that’s why Jesus founds his Church on Peter. Peter was headstrong and courageous, but he was also honest and vulnerable. He walked on water for an instant, but then he faltered. He made the profession of faith for which Jesus names him Peter, moments before he tried to talk Jesus out of the Passion, for which Jesus calls him Satan. He made bold promises at the Last Supper, and drew his sword at Gethsemane, only to flee moments later and deny the Lord hours later. But every time Peter fell, he got up and started again. And Peter did strengthen the brethren. He was a huge source of encouragement.

We see something similar in that cartoon. Junior’s humility and vulnerability makes a big impression, moving father to imitate son. When you are humble and vulnerable, you can bet you have a similar impact on others, however much it might surprise you.

Let’s return to that scene in the Gospel:

Literally, ἐκκλησία (ecclesia) translates as “Assembly.” “My gathering of people.” “My popular movement.” Perhaps the best translation of all is: “my communio.” The Church is a communion of people — in union with the pope, nourished by the Eucharist, with Christ as our head. Moreover, the Church is a communion of vulnerable and broken people — like Peter, and me, and you.

In and through our vulnerability, we’re called to strengthen the brethren. To encourage each other. When we approach God (and each other) with humility and vulnerability — great things happen! Mysterious things.

[The Lord] has answered me, ‘My grace is enough for you: for power is at full stretch in weakness.’ It is, then, about my weaknesses that I am happiest of all to boast, so that the power of Christ may rest upon me; and that is why I am glad of weaknesses, insults, constraints, persecutions and distress for Christ’s sake. For it is when I am weak that I am strong. (2 Cor 12:9–10)

How rich are the depths of God – how deep his wisdom and knowledge – and how impossible to penetrate his motives or understand his methods! (Rom 11:33)