Auschwitz. The most notorious concentration camp in history. The commandant of Auschwitz was Rudolf Höss, who personally perfected the Nazis’ mass murder techniques. During his four year leadership at Auschwitz, three million prisoners were killed. Survivors of Auschwitz referred to him as an animal. Not merely an evil man, but an animal.

A year after Europe was liberated, Höss was captured and tried for war crimes. He was sentenced to death, and the court declared Höss should be executed at Auschwitz, where he had killed so many people. Höss was terrified — not of death, but of life in Polish prisons, where he would be at the mercy of guards whose relatives he had killed. He had already endured the cruelty of his British captors. He was convinced that the Poles would torture him. Sure enough, he was placed into the custody of Polish guards who were personally impacted by his crimes. Some of them showed him their Auschwitz tattoo numbers.

His Polish guards, however, treated him well. He was astonished. They showed him mercy. Mercy is the love we know we do not deserve. Höss knew he didn’t deserve the guards’ respect. Their restraint. Their mercy. But that’s what he received. This was the moment of his conversion. Höss was brought up Catholic, but he had renounced the faith when he was a teenager. Now he asked for a priest.

In 1947, however, wounds were still raw. No priest would come. At a human level, it’s understandable. Rudolf Höss had the blood of 3 million people crying out to heaven for justice. Not a priest could be found, willing to absolve the animal of Auschwitz. Then Höss requested a priest by name: Father Władysław Lohn, a Jesuit whose community had perished in Auschwitz years earlier. Only Fr Lohn was spared, because he was away at the time of arrest. Upon his return, he had sought the Commandant’s mercy, but he was refused and sent packing. Now Höss begged the guards to find him. And they did find him — at the Shrine of Divine Mercy in Krakow, where he was chaplain. The priest came and spent several hours with Höss. At the end, Höss received absolution. The animal of Auschwitz was told: “The Lord has freed you from your sins. Go in peace.”

After his death, a letter Höss wrote was published in the country’s newspapers. In that letter he wrote:

“In Polish prisons I experienced for the first time what human kindness is. Despite all that has happened I have experienced humane treatment which I could never have expected, and which has deeply shamed me . . .

“I have come to the bitter recognition that I have sinned gravely against humanity . . . I caused unspeakable suffering . . . but the Lord God forgave me. And now I ask the Polish people for forgiveness.”

This story is an outstanding example of divine mercy for two reasons:

We can only give what we have received. So let’s renew our trust in God’s mercy. Let’s resolve — especially if it’s been a long time — to make a good confession; to receive the Sacrament of Divine Mercy. And then, especially towards those who have hurt us, let’s resolve to be ministers of mercy — the love we know we do not deserve. 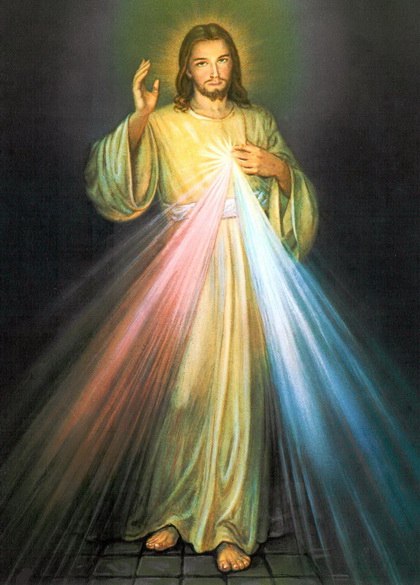 Jesus, I trust in you

The scandal of religious hypocrisy