Today is the feast of St Augustine of Hippo, one of the most important figures in western thought. His influence rivals that of Moses, Plato and Aristotle, St Paul and St Thomas Aquinas. The second chapter of Thomas Cahill’s How the Irish Saved Civilization (highly recommended) presents a fascinating study of Augustine as “almost the last great classical man — and very nearly the first medieval man.” Augustine’s legacy includes the inventions of the autobiography and the modern novel, and the genesis of the psychological sciences.

First and foremost, however, Augustine was a disciple of Christ and a bishop of Christ’s Church. As Augustine himself preached, “I am a Christian for my sake, whereas I am a shepherd for your sake.” It was not always so. In his youth, Augustine railed against the Catholic faith of his saintly mother Monica, confessed the false religion of Manichæism, and abandoned himself to the usual hedonistic pursuits: idleness, alcohol, sex.

At the age of 30, Augustine moved to Milan with high hopes of a glittering political career. All the while Monica prayed and fasted for her son’s conversion, and God answered her prayers and tears in the person of Ambrose, Bishop of Milan, famed throughout the Empire for his wisdom and goodness. Augustine had no interest in the bishop’s religion, but he responded to Ambrose’s warmth and hospitality. “I began to love him,” Augustine later wrote, “not as a teacher of the truth — I had entirely despaired of finding that in your Church, Lord — but as a friendly man.”

Augustine’s spiritual battle now reached its crescendo. Laying the foundations of his political career, he dismissed his unnamed lover of 14 years, mother of his son Adeodatus. But in his subsequent grief and loneliness, he sought sensual consolation by adopting a new lover. This occasioned his famous prayer, which has resonated with countless penitents over the subsequent centuries: “God, make me chaste, but not yet.”

One day, in a secluded garden, Augustine wept bitterly as he contemplated his struggle with old habits and new aspirations. Torn between carnal desires and spiritual longings, he begged God for help. Then the sound of a child’s song was carried in the breeze: “Tolle, lege. Tolle, lege.” “Take up and read,” the childish chant repeated. Augustine obliged, opening his prayer book at a random page which struck a chord and changed his life: 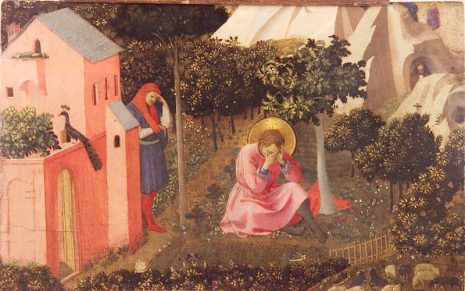 Augustine’s prayers were answered, and the rest is history. His storied conversion renders many lessons. St Monica’s perseverence demonstrates the importance of sustaining relationships — even strained relationships — with regular contact, prayer and fasting. St Ambrose shows us that sincere and unconditional friendship is critical in attracting others to Christ. And St Augustine? He reminds me and you that every saint has a past, and every sinner has a future.

Join a Dial-in Rosary at midday, which will conclude with a litany to St Augustine. We’ll pray for an end to the COVID pestilence, for the grace of conversion, and any intentions left in the comment thread below.

12pm Angelus, Rosary, and Litany to St Augustine. On Facebook Live, or www.moynecatholic.org.au. 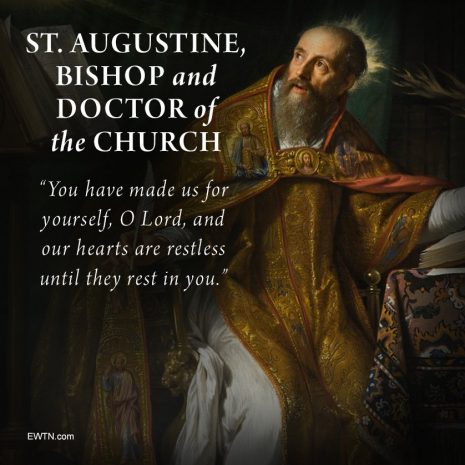 St Augustine, pray for us