The First Year students of Corpus Christi College are on pilgrimage this weekend. Their destination is Penola, where St Mary MacKillop founded the Sisters of St Joseph of the Sacred Heart.

The seminarians departed Carlton yesterday, and stayed in Hamilton overnight. During their stay in Hamilton, they visited and prayed at the grave of Mary’s father, Alexander MacKillop. 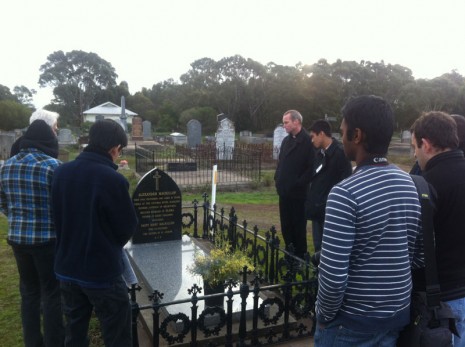 The last two years of his life, Alexander lived with his brother’s family in nearby Dunkeld. He frequented Hamilton’s Victoria Hotel, where he figured prominently in public debate over a variety of political issues.

It was here that he was afflicted with a stomach haemorrhage on Thursday 3 December 1868. Alexander’s illness was reported in Hamilton’s local newspaper, The Spectator.

His wife, who resides in Portland, was informed by telegram, and arrived last evening. Mr MacKillop has of late associated himself with public matters in Hamilton, and cannot fail to be recognised.

Sadly, the same newspaper reported his death a fortnight later.

Mr A. MacKillop, whose sudden and serious illness was referred to in our last, expired in the Victoria Hotel at about 6 am on Saturday morning. [19 December 1868]

It is satisfactory to know that his wife was present at the time of his death, and that he breathed his last in apparent peace. Mr MacKillop was a Roman Catholic, and was at one time intended for the priesthood. He leaves a large family to mourn his loss. The funeral took place on Sunday last.

A great many pilgrims stop by the parish, and Alexander’s grave, on the way to Penola.

May God bless the seminarians on their own pilgrimage, and inflame their hearts with the love and generosity which inspired Mary.

St Mary of the Cross, pray for them.