For those, like me, who love reading about the saints, today is a rich day! Not only is today the optional memorials of St Bede the Venerable, Pope St Gregory VII, and St Mary Magdalen of Pazzi, but it’s also the day of Don Pino Puglisi’s beatification.

Four fascinating “older siblings,” whom we can learn from and pray to. 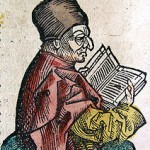 St Bede was a great monk and scholar, whose life and work anticipated the renaissance of the High Middle Ages. I first learned about him when I was a kid, playing Sid Meier’s Civilization. Bede was mentioned for his Ecclesiastical History of the English People, which is one of the great and timeless works of western civilisation. I have a copy of it somewhere, but I have not read it (yet).

Bede’s scholarship — and his sanctity — have earned him several impressive titles. In 746, St Boniface described him as, “a light of the church, lit by the Holy Spirit.” In 1899, Pope Leo XIII declared him a Doctor of the Church. And he is popularly known as ‘the Father of English History.’

Bede compiled the first hagiography (biography of saints) which conformed to objective historical principles. He was the finest scriptural commentator of his generation. He is the earliest known author of English prose (though sadly, the prose itself is not extant). And he popularised the ‘AD’ dating system we still use now.

Today’s Office of Readings includes an endearing account of his holy death. 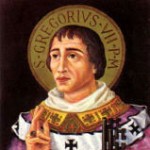 Like St Bede, St Gregory VII was a wise and holy monk, who was trusted advisor to several popes. Eventually, he was elected pope himself — much to his horror and chagrin.

His election was grossly irregular. In the midst of Pope Alexander’s funeral, the assembled crowd nominated him by popular acclamation. A hasty conclave of cardinals ratified the decision within hours.

Upon learning of this, Gregory wrote to the Holy Roman Emperor, beseeching him to nullify the election, and warning him that should he become Pope, he could never tolerate the Emperor’s scandalous crimes. Henry nonetheless assented to Gregory’s election — a decision he came to regret.

Gregory was the sort of pope we’re all hoping Francis will be: a great reformer, who renewed and purified the Church. Many corrupt bishops, abbots and priests — not to mention princes — were deposed. As you can imagine, he made many powerful enemies, not least among them, the Emperor.

Gregory maintained the peace and composure of a cloistered monk, despite a tumultuous pontificate. He survived several assassination attempts; Rome was besieged and sacked; an anti-pope was installed; he died in exile, unsure of his legacy.

His legacy was in fact, positive and far-reaching. It included a restoration of the moral integrity of the clergy, and affirmation of the doctrine of the Real Presence. Nearly 1,000 laters, Pope Paul VI quoted a confession of faith Gregory composed and required of a recalcitrant cleric. It is a confession every Catholic of our own time can make their own:

I believe in my heart and openly profess that the bread and wine that are placed on the altar are, through the mystery of the sacred prayer and the words of the Redeemer, substantially changed into the true and proper and lifegiving flesh and blood of Jesus Christ our Lord, and that after the consecration they are the true body of Christ, which was born of the Virgin and which hung on the Cross as an offering for the salvation of the world, and the true blood of Christ, which flowed from His side, and not just as a sign and by reason of the power of the sacrament, but in the very truth and reality of their substance and in what is proper to their nature. 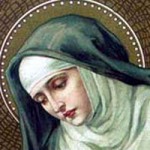 The Breviary’s short biography of St Mary Magdalene of Pazzi leads one to compare her to St Thérèse of Lisieux:

She was a Carmelite nun who led a hidden life of prayer and self-denial, praying especially for the reform of the Church and the conversion of the whole world. She guided her fellow sisters along the path to perfection. She was granted many spiritual gifts by God.

In fact, she wasn’t anything like St Thérèse. She has more in common with St Teresa of Avila, insofar as she was a visionary and mystic, to whom Jesus often appeared and engaged in conversation. But where Teresa was down to earth and ruthlessly practical, Mary Magdalene was eccentric to say the least. There’s an old saying: “You’d have to be a saint to live with a saint!” That’s not always true, but I think it was coined with St Mary Magdalene in mind.

Probably, I’m being unfair. Mary Magadelene held many leadership positions within her community, which would not be bestowed on an authentic hysteric. I admit I really struggled through her reading in today’s Office, but I’ve never been a poet. 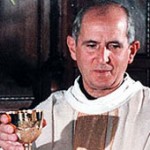 I’ve blogged about this heroic martyr priest before. Today he is beatified! I hope the event is cause for more information about him to be made in the English language.

As it stands, I’ve only ever read two articles on the man. One from MercatorNet: Murdered by the Mafia, honoured by the Church. And one from First Things: The Priest who stood up to Mafia.

Anyone proficient in Italian, however, has much more at their disposal. Here is a biopic, which is recommended to me by a brother seminarian:

I just finished watching a documentary on Don Pino Puglisi who will be beatified this Saturday, 25th May in Palermo, Italy.

I must admit I couldn’t help but get emotional at the funeral footage and the thousands who followed behind his casket including the young people he helped. Don Pino’s story captivates me, and every time I read or watch something I come away inspired.

Anyway, I’ll be following the events over the weekend and I’ll keep you informed. This event will get a lot of press in Italy, but I doubt we will hear much in Australia despite the significance of it in the history of the Church.

Aslan is not a tame lion; and you’re a hypocrite!