There was a time, many years ago, when I thought the best place for pro-life prayer vigils was before the Tabernacle. To pray outside an abortion clinic, I thought, was too provocative. And too earth-bound. Didn’t our Lord tell us to pray in our rooms, not in the marketplace?

I have since heard many conversion stories which have changed my mind. To pray before the Blessed Sacrament is of course invaluable, but the power of prayerful witness in a person’s hour of need is also compelling. Some pro-life friends in America have just sent me another good news story.

I just got this text a couple hours ago. I was jumping up and down and shouting Hallelujah! Jake was looking at me like I was weird.  I tried to remember everyone who was there praying along with a few pro life hearts that I know will rejoice with us.

In case any of you don’t know the story, this couple was brought down from South Dakota by the girl’s mother for an abortion. They came over to talk to us when we called out to them. It was clear the father didn’t want the abortion. The girl was undecided but her mother was pressuring her because she is still in high school and had a bright future. The mother thought it would ruin her future and the family was struggling financially.

It seemed clear that the parents didn’t want to abort. They answered in the affirmative when I asked right out if they wanted to keep the baby. I asked if I went up to them if I could get a hug and pray with them. The girls face went from looking beat up to a huge grin. I got their phone number so I could follow up. As I was holding their hands praying with them the mother was all the while holding Planned Parenthood’s door open screaming for them to get their butts inside.

After they went in it looked like we might have lost the battle. We were storming heaven for probably 30-40 minutes refusing to be handed a defeat. Suddenly Pastor Randy Rivers said “Hey … they just left. The Lord told me to stand right here.” (Where he had a clear view down the sidewalk.)

We no sooner moved to where the Lord told us to stand and we saw the three of them come out the door. They went and got in their car and just left.

We have been in contact with them and told them Pastor Chuck’s church would pitch in to help out with the baby expenses. We connected them with a pregnancy center pretty close by. I assume that is where the  ultrasound was taken. 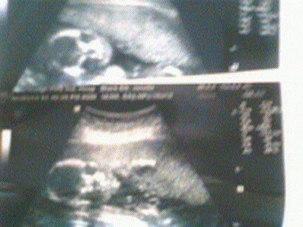 Along with the picture Janelle texted this:

20 Wks today. Its a girl! Yay!!  Thank you!  You guys changed my life for the better and Im so glad she’s going to be here in our lives. Just to hear the heart beat and see and feel her moving is awesome…Thank you again.

Meanwhile, a recent news story claiming that pro-life counselling centres had indulged in dishonest online advertising, and Google had banned them, has been exposed as a hoax. I’m glad I ignored repeated requests last week to sign a petition condemning Google and blog about the issue. Facts are important, but they’re easily obscured in the immediate aftermath of breaking news.

It always pays to wait. Especially on the web!