This week I’m on my annual retreat at Kenthurst, north of Sydney. Five days alone with the Lord. (Notwithstanding another twenty priests also on retreat!)

The retreat director is Fr Max Polak, who was my spiritual director when I was a seminarian. He moved to Melbourne six months before I joined the seminary in 2005, and he was parish priest of St Mary’s, West Melbourne until 2013. Now he lives in Sydney, so it will be great to catch up with him.

I won’t be blogging in real time, but I’ve prepared a series of blog posts during the flight to Sydney, so there will be a scheduled post each day this week. More than my recent average, that’s for sure!

You might remember the retreat centre in Kenthurst accommodated Pope Benedict prior to Sydney’s World Youth Day in 2008. There are some photos at www.opusdei.org.au.

One of the photos depicts the Holy Father presenting a gift to the retreat centre at the conclusion of his stay: 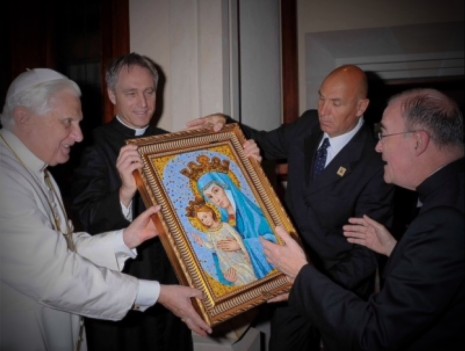 It is a replica of the Mater Ecclesia mosaic which looks over St Peter’s Square. Its installation in 1981 was the initiative of Pope John Paul II, but a few members of Opus Dei also had small roles in its history, so this gesture of Pope Benedict resonated in a particular way.

Kenthurst’s mosaic of our Lady, Mother of the Church, now graces the narthex of the chapel. I’ve asked our Blessed Mother to pray for me especially during my retreat, that I am attentive to the inspirations I receive from her Son, and that I’m faithful to the resolutions I consequently make.

I’ll pray for all my blog readers, as well as my parishioners. Godspeed.