Missouri’s “mystery priest” has been identified as Fr Patrick Dowling, an Irish-born priest of the local diocese.

Fr Dowling identified himself quite early, in a comment he left on an online article, but apparently it took several days for the news to filter through. (I must confess, I seldom read comments myself — except on my own blog of course!) 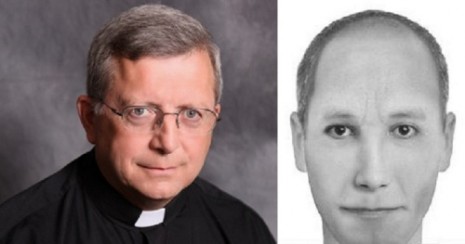 Though the highway was blocked off, Father Dowling revealed he “did not leave with the other cars.” After parking as close as he could to the scene of the accident, he said he walked the remaining 150 yards.

He affirmed that it was in the normal duties of a priest, “except that there was something extraordinary it sounds like, in the sequence of events that coincided in time with the anointing.”

“You must remember: There were many people praying there, many, many people … and they were all praying, obviously, for healing and for her safety,” he said.

“I was probably part of the answer to their prayers: I came by, and anointed, and absolved,” he said.

The fact that Missouri is part of America’s “Bible belt” may explain why local emergency workers and local press raised the possibility of an angelic apparition, which national and international press then ran with.

I was dubious of that interpretation, but not because I doubt apparitions. Not at all. It’s just that when I first heard about the story, I immediately thought of this scene:

It comes from Fishers of Men, an 18 minute documentary on the priestly vocation which was released in my second year at the seminary. It was hugely popular with us seminarians, because it resonated so deeply with our own understanding (and awe) of the priesthood.

I know some priests were bemused by the video — especially the accident scene, which presents the priest as an action hero. But a few years later, I was staying at Sydney’s Warrane College, which is on a very busy arterial road. Late that night, the screech of tyres and a terrible crash woke me. I rushed to my window and looked down on an accident scene. Not thirty seconds later, I watched a soutane-clad figure sprinting towards the car wreck.

It was Fr Joe Pro, who was then chaplain at Warrane College. He had obviously heard the crash, grabbed his oils, and ran. Fortunately, nobody was seriously injured, but the scene left a deep impression on me — like the scene from Fishers of Men. (Fr Joe, incidentally, is the great nephew of Bl Miguel Pro, the Jesuit martyr, who like St Toribio was a casualty of the Cristero War, and like St Toribio made several resurrection appearances after his death.)

To my mind, the identity of Missouri’s mystery priest doesn’t downplay its miraculous nature at all. As Michael Brown observes, the story “presented the Catholic faith in the most positive of ways — involved in the supernatural glory and intervention of God.” And as Fr Dowling notes, his presence at the scene was improbable and providential.

Miracles happen, great and small. It would be a shame to miss the small miracles because we are only looking out for big ones.