A beautiful woman of faith died this week. Some call her a mystic. Marjorie Liddy died on Wednesday, en route to the Tiwi Islands, returning home from priestly ordinations in Melbourne.

In his opening remarks at Wednesday’s episcopal ordination Mass in Sydney, Archbishop Fisher brought our attention to the chasubles worn by many of the concelebrating bishops: 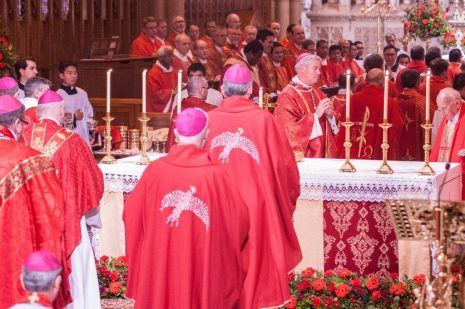 These were the chasubles designed for the papal Mass at Sydney’s World Youth Day. On the back of the chasubles is an image commonly called Marjorie’s Bird, although Marjorie herself has a more beautiful title: The Day The Holy Spirit Visited Marjorie And Her People — the latter being all the people of Australia. 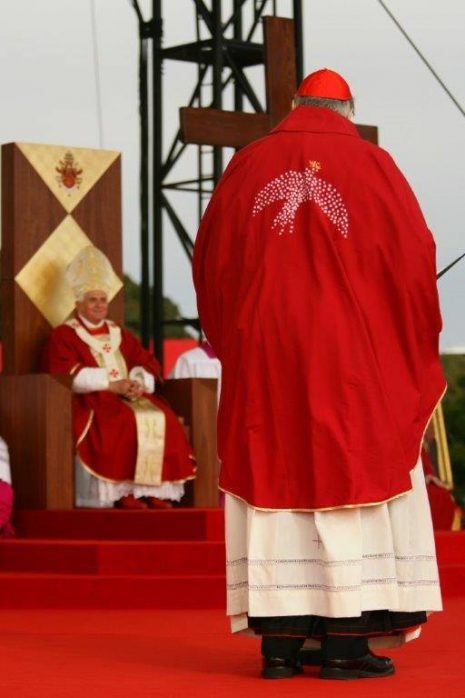 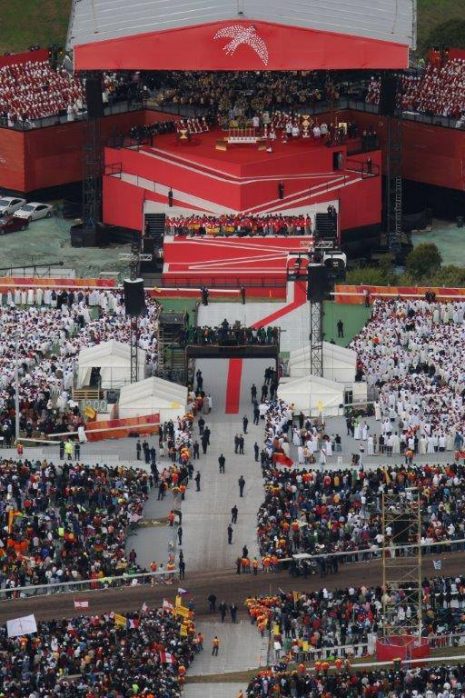 You can read about Marjorie and her image, and how it emblazoned Sydney’s World Youth Day, in this article dating back to 2008. But if you can spare half an hour, it’s much better to watch Marjorie tell the story. (If you can’t find the time, I recommend you make the time!)

Here is an interview which first aired on community television in 2006:

I never met Marjorie, but after watching this interview, I wish I had. I have met Denise Kelly — she’s friends with my grandmother — who collaborated with Marjorie in several writing projects. (Denise, not my grandmother.) Both Marjorie and Denise claim to have received extraordinary gifts from the Holy Spirit, and both women are also remarkably humble and faithful daughters of the Church.

Here’s a snapshot into Marjorie’s character from the linked newspaper article:

Liddy will be one of a number of indigenous women who will form a guard of honour for the Pope in Sydney on Thursday, and she has a letter from Cardinal George Pell naming her as a World Youth Day VIP.

“When I first heard that on the island, I just grabbed a handful of dirt, threw it all over myself,” she said. “I felt unworthy.”

There are similar snapshots in Marjorie’s TV interview. Her demonstration of unadorned faith and spiritual childhood is like a breath of fresh air. Eternal rest grant unto her O Lord. May perpetual light shine upon her, and may she rest in peace.

The last word belongs to Marjorie, who in the Spirit of Life interview was asked her advice to anyone who struggles to hear the quiet promptings of the Holy Spirit:

Open your hearts. Let Him in. Let Him in. He will help you to know and understand Mother Mary and Jesus. There’s so much love the Lord has for us. So much love. He wants us all to love Him. To go back — to go to Mass, go to confession, and receive Him. And our love will grow, grow. But let the Holy Spirit start a new life.