It’s pretty wet out here. Early Friday morning, the Glenelg River burst its bank in Coleraine, submerging the highway and dozens of homes and businesses.

The flood waters had receded by Friday afternoon, and then the clean up began. Then it was Casterton’s turn. The Glenelg burst its banks here on Saturday. Here’s a harrowing video filmed on Sunday, when the flood was more or less at its worst. The film shows the natural beauty of the land out here — rolling green hills peppered by majestic redgums. I live in a really beautiful part of the world. But the sinister sight of brown floodwater isn’t so pretty.

It’s raining again now, and the experts predict the waters to rise again tomorrow. There are also fears for Harrow. I offered Mass there on Sunday, and although the river had burst its banks there too, the water hadn’t inundated buildings. Yet.

I drove through a flooded road to get to Sunday Mass. I won’t do that again. I’ve since learned that only 15cm of water is enough to wash your car off the road. I was more circumspect when confronted with flooded roads yesterday, and aborted my drive to Edenhope. I’m due there again on Thursday. Here’s hoping it’s possible.

All that said, media reports — and probably this blog post too — relate a tone of crisis and sorrow which isn’t true to the attitude here at all. I’m generalising of course, but I think there are two reasons country residents, when faced by adversity, are better equipped than their city cousins:

As far as history goes, here’s some pictorial context. The floods of 2016 aren’t good.

The bottom pub, right on the river

St Vinnie’s (the water didn’t get in)

A house surrounded, but not flooded

The view from above — not far from the church

But the locals have seen worse. The flood of 1946 is living memory for many, rivalled only by the legendary flood of 1903. On both occasions, I am told, the houses I drive past before ascending the hill to the Catholic church and presbytery — were almost completely submerged.

It’s hard for me to imagine such a deluge. But many people don’t have to imagine it — they remember it, which puts the present floods into perspective. 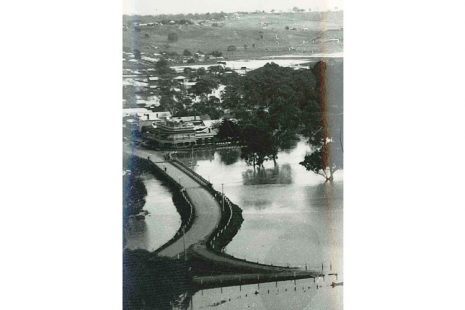 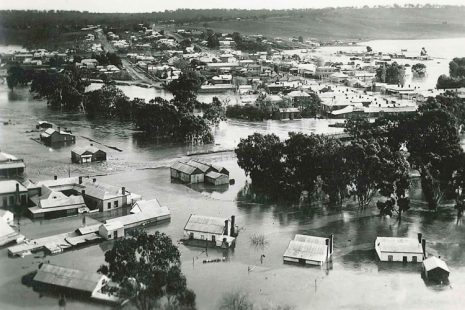 “We’ll all be rooned,” said Hanrahan. But, like the locals, I’m more optimistic.