My two days in Assisi were always going to culminate in a visit to St Francis’ tomb. I deliberately waited until the afternoon of the second day to make this pilgrimage.

St Francis is a massive figure in my life. I took his name at my Confirmation, and as a child I always thought I’d join the Franciscans if I consecrated my life to the Church. (That was always a whimsy though, not a serious resolution.)

In the last decade, the spirituality and writings of St Jean-Marie Vianney and St Josemaría Escrivá have influenced me more. Certainly I have read more of, and hence know more about, these two priests, than I do the holy man of Assisi.

But on the other hand, it’s only Francis to whom and with whom I have prayed every day for over 20 years. That’s two thirds of my life. So visiting his tomb is a big deal. 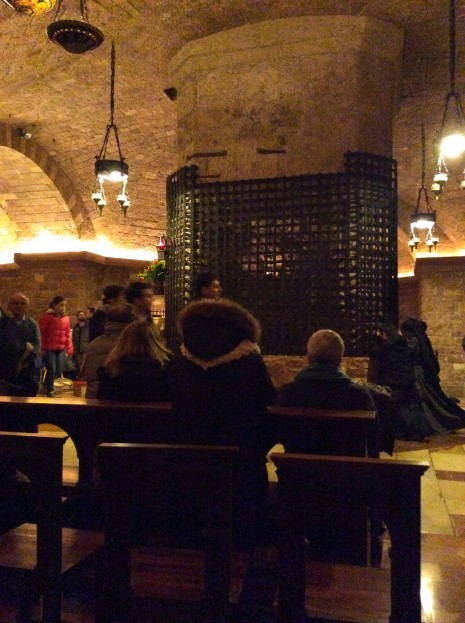 Thousands must have passed by Francis’ tomb while I sat here. The elderly, parents with young children, and as this photo illustrated by happy coincidence, religious. There were also many young people seriously discerning their vocation. Pray for them!

I could write so much more, but some things are very personal. Suffice it to say that when I sit down before the tabernacle and pray, I check my watch 30 minutes later only to find that a mere five minutes have passed. So another 25 more or less interminable minutes ensue. That’s my experience of prayer. Every time. Twice a day. For years. This is not a bad thing. It teaches us to spend time with and love God for His sake, not our own. (As with God, so with our neighbour.)

Before the tomb of St Francis, though, I checked my watch about ten minutes after sitting down, and two hours had passed already! I received the sort of consolations one can expect to receive two or three times in one’s life. Lots of encouragement, and some corrections too.