Father Brown on film and TV

Chesterton describes Father Brown as very short and dumpy, with “a face as round and dull as a Norfolk dumpling.”

The fictional priest detective was reportedly based on Mgr John O’Connor, who received Chesterton into the Catholic Church in 1922. Here’s a real-life photo of Fr Brown’s inspiration: 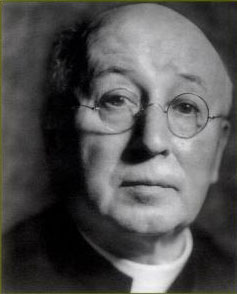 He’s quite Hitchcockian, don’t you think?

Father Brown has been adapted to film and TV many times, and he hasn’t always maintained his English origins, much less his canonical appearance. Italians have recast him as an Italian, American have made him American, and just to mix things up a little, the Germans have made him Irish!

In his latest incarnation — which is currently screening on the ABC at 7:30pm Saturdays — Fr Brown is transported from 1930s London to the 1950s English countryside.

Having watched two episodes, I venture to say that Father Brown has been modernised and dumbed down. Sadly, modern TV writers have treated Chesterton as they’ve treated Agatha Christi. In each case, the contemporary incarnations of Hercules Poirot, Miss Marple, and Father Brown are impoverished copies of their original selves. Complex characters and intricate stories are reduced to the cliched and formulaic.

Despite all that, the new Father Brown series is enjoyable to watch and I recommend it.

Minimal Internet research has uncovered several clips with which to compare the new BBC series. I think for many people, Sir Alec Guinness is to Father Brown, as Sean Connery is to James Bond. His 1954 film, Father Brown was so well-received that it eclipsed Walter Connolly’s 1934 film, which is sadly lost to posterity.

If you’re so inclined (I’m not admittedly) you can view the entire Guinness film on YouTube:

The 2013 TV series is more easily compared to the 1974 series starring Kenneth More. I haven’t seen it, but judging from this clip, it’s much more faithful to Chesterton’s writing. I suspect it is more intellectually demanding that the current series, but maybe that means it’s also more satisfying.

(Warning: this clip contains spoilers. If you intend to watch the first episode of the new series on ABC’s iView, don’t watch this clip, else you’ll know whodunnit!)

I don’t know German, but if I did, I would tune into YouTube and watch Germany’s two film adaptions of Fr Brown. I wonder if Fr Brown enunciates his German with an Irish accent?

I don’t know Italian either, but at least one of my readers is fluent. The entire six-part series of I Racconti Di Padre Brown is available on YouTube.

I am more fluent in American, but nothing would compel me to watch Sanctuary of Fear, a 1979 telemovie which transplants Fr Brown to 1970s Manhattan. The movie was intended to launch a TV series, but the pilot’s so bad that the series was axed before it started.

And finally, EWTN has dramatised at least one of the Father Brown stories, translating Chesterton verbatim onto the screen, and on a tiny budget. The production values are lousy, but I bet the writing makes up for it:

All in all, I’m quite happy with the new BBC series, not only because it’s 50 minutes of mindless fun, but also because it has inspired me to reread Chesterton’s short stories, which are certainly not mindless, but still a lot of fun.