For the last three years, the Evangelium Summer School has been held on the Australia Day weekend, at Melbourne’s seminary. The weekend basically provides young adults with some intensive exposure to the riches of Catholic wisdom.

I think events like this are very important. I attended something similar in the summer of 2000, right before I started university. The Thomas More Summer School introduced me to an intellectual world I’d never known before, and the rest is history. I can’t say it was the reason for my ‘adult conversion’ — that is, my decision to become an intentional Catholic; to claim for myself the faith I was raised in — but certainly it was critical to the process.

So I give a lot of credit to Fr Nicholas Pearce and his team for organising this annual event, which is not limited to intellectual formation. The program also includes liturgy and eucharistic adoration in Corpus Christi College’s beautiful chapel, and time for recreation — an Amazing Race, an Australia Day barbecue, and a “Scholar’s Lounge,” which provides live music in the evenings.

This year’s program is focused on the history of the Church. The main presenter is Bishop Peter Elliott, who will attempt to cover the following:

•  Constantine, the Early Church Fathers and the Mediaeval period.

•  Christendom, the Renaissance and the Reformation.

•  The Enlightenment, revolutions and Jansenism.

•  The Catholic revival, the missions and the Church in Australia.

•  The 20th Century, the Second Vatican Council and beyond.

Right now, I’m preparing the workshop I’ll present next Monday. My one regret is that it prevents me from attending some of the others, which between you and me sound more interesting than my own! 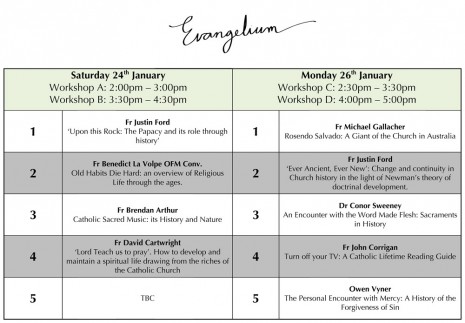 Perhaps I should have blogged about this a week ago, when registrations were still open. The numbers are now fixed. Never mind. Readers can still pray for its success!